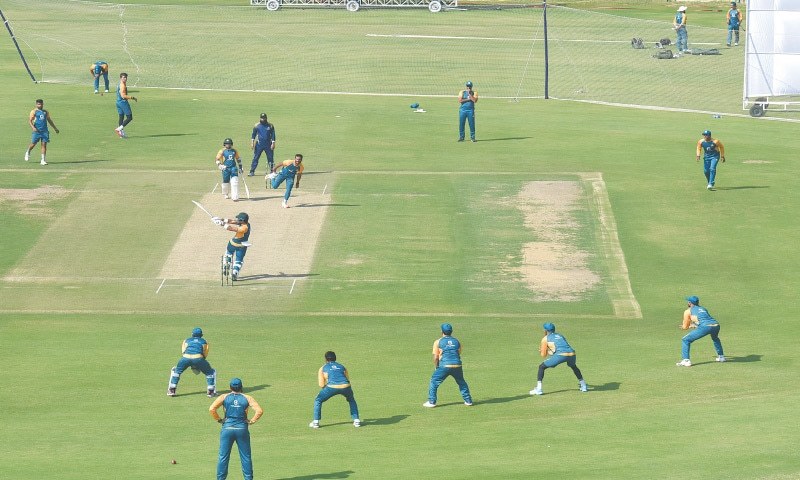 KARACHI: The newly-formed Pakistan Cricket Squad began preparations for next week’s first Test against South Africa with a wide practice session at the National Stadium here on Thursday.

Yousuf and Thaqleen, along with Brad Byrne, who are here to watch the domestic matches, are in the city to watch the final round of the ongoing Pakistan Cup. He will attend training sessions over the next two days.

What will be Pakistan’s first series after beating the national team 2-0 in New Zealand earlier this month? Misbah and Waqar are under pressure to join the team after meeting PCB cricket in Lahore last week. Turn to destiny. Committee headed by Saleem Yusuf.

But while both Misbah and Waqar have survived – at least for the South Africa series – the incoming chief selector, Mohammad Wasim, blamed the nine-blocked players in the early 20’s for the New Zealand squad. Strict monitoring. Main squad for the series against the Proteas.

Shaun Masood, Haris Sohail, Mohammad Abbas and Naseem Shah have all been left out after poor performances in the last two tours of England and New Zealand. The new faces in the Test squad, who will turn 16 this weekend, include Imran Butt, Saud Shakeel, Kamran Ghulam, Agha Salman, Abdullah Shafiq, Sajid Khan, Noman Ali, Tabish Khan and Haris Rauf.

Also returning to the team after an 18-month absence is capable fast bowler Hassan Ali, who has shown top form during the recently concluded Quaid-e-Azam since the 2019 World Cup in England. Missing from the national team. Trophy. Hassan’s bravery as a captain gave Central Punjab a chance to play a thrilling tie against Khyber Pakhtunkhwa in the final at the National Stadium earlier this month, with both teams winning first-class titles.

Pakistan will continue their training at the National Stadium for the next four days, while the tour of South Africa, which arrived in the city last week and had several nets, played an intra-squad practice game at the Karachi Gymkhana – which is attached to their hotel. ۔ – Another fixture is to be played at the same venue on Thursday and Friday.

Starting Saturday, Quentin de Kock will begin preparations for his Test at the South African National Stadium. On the eve of the first Test starting on Tuesday, South Africa head coach Mark Boucher will hold a media conference before the match.

Pakistan captain Babar Azam will lead the county in a Test match for the first time since losing both the T20 and Test series against New Zealand, after suffering a thumb injury during a training session in Queenstown.

The second Test will be played in Rawalpindi from February 4, before which both the teams will leave for Lahore on February 11, 13 and 14 for three T20 matches. In the absence of the first tourists, there will be a tourist team led by Henrik Klaassen. I also include D-Cook. , Faf du Plessis and Kagiso Rabada, who are flying back from the final Test to undergo a singles test before the South African home series against Australia.